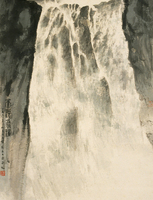 “Chinese Art in an Age of Revolution: Fu Baoshi (1904–1965),” which toured to the Cleveland Museum of Art (CMA) and the Metropolitan Museum of Art, was a far-reaching tribute to one of the greatest Chinese artists of the 20th century. This comprehensive show of scroll paintings, seal carvings and…