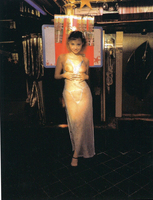 Quentin Tarantino is a man who loves movies. In his fourth film, Kill Bill Vol. 1, it is not just the viewer, but the actors who are transported into the "movie world." He explains, "This is me imagining what would happen if that world really existed, and I could take a film crew in there and make a Quentin Tarantino movie about those characters." Indeed the movie world is filled with iconic characters of 1970s martial arts films, as well as traces from Kurasawa's films and heavy doses…