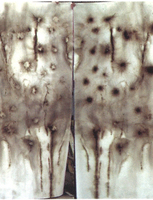 In the late 1960s, Japan joined the ranks of the advanced industrialized nations, thanks to its phenomenal decades-long economic success, which followed its devastating defeat in the Second World War. Expo '70, held in Osaka in 1970, symbolized the nation's hopeful mood, engendering a space of festivity, where millions of people congregated.

Kenji Yanobe, born in Osaka in 1965, frankly admits the impact that the exposition had on him in his childhood. His recent…