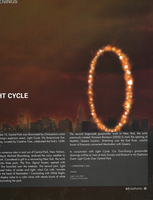 Visible from numerous sites in and out of Central Park, New Yorkers, including Mayor Michael Bloomberg, endured the rainy weather to view the work. Considered a gift to a recovering New York, the work is broken into three parts, the first, Signal rowers, opened with columns of fire launched over the treetops. The second part, Light Cycle featured halos of smoke and…