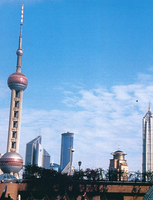 The Making of a Historical Event

The 2000 Shanghai Biennale was held from 6 November 2000 to 6 January 2001 in the newly expanded Shanghai Art Museum. Soon after its opening - and long before it completed its full course - people were already envisioning it as history.

Thus we heard much about its projected 'historical significance' during the first few days of the show, albeit…