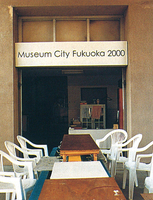 For a month in late 2000, the abandoned Gokusho Elementary School in the centre of Fukuoka became the administrative heart of Museum City Fukuoka 2000. Classrooms, with their high ceilings and expansive windows, were turned into studios and then galleries where artists and visitors could mingle freely. School offices, meanwhile, became art offices where Museum City Fukuoka 2000 coordinated a citywide project involving twenty-three artists in seventeen locations in the centre of Fukuoka, the thriving commercial capital of the…