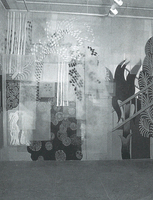 In an interview with Shahzia Sikander, University of Chicago-based cultural critic Homi Bhabha responds to Sikander's predicament as the bearer of traditions not many people in the United States understand or know about. He comments to Sikander: 'You've suggested that many people are intimidated by the iconography; they say, "Thiis is from India. What is this about?", immediately exoticising the work. But suppose we don't want an exoticism. We don't want an orientalism.'…