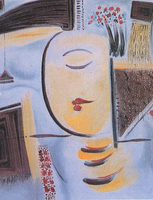 Through the ages Vietnam has seen a lot of cultural changes brought about by many impetuses—for instance, the flourishing of Buddhism in the eleventh century, the ubiquitous influence of Confucianism in the fifteenth century, and the establishment of the Indochina College of Fine Arts (École des Beaux Arts d'Indochine) by Victor Tardieu in 1925. Since the 1980s, Vietnamese contemporary art arguably has been influenced most strongly by one man—Nguyen Quan.

As an artist, Nguyen Quan…