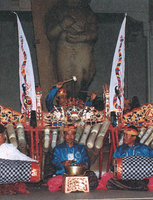 The Non-Aligned Movement [NAM] started in 1955 with the meeting in Bandung of some of the grand political figures of this century: Nehru, Sukarno, Zhou Enlai. The anniversary of these events and of fifty years of Indonesian freedom, coinciding with Indonesia's chairmanship of the Non-Aligned Movement, was commemorated in Jakarta by exhibitions and a conference. The events took place in a domestic context of increased hostility to the government of President Suharto and direct government pressure of various kinds on the art world, such that a number of prominent younger…