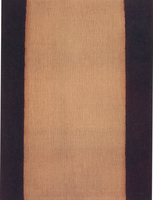 Preceded by Informel which had dominated the art scene in Korea during the 1950s and influenced by Art Informel from Europe and Abstract Expressionism in the United States, monochrome painting was the definitive mode in Korea during the 1970s. Monochrome painting made possible a discourse about modern art that assimilated aesthetics which were native to Korea, and as such was to become the epitome of modernism in Korea. This…