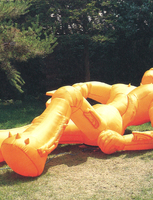 The momentum of contemporary Korean art

Since the era of modernisation, the resistance against—and the antipathy toward—a succession of morally illegitimate governments has loomed as the backdrop to the Korean cultural condition. These factors had such a pervasive effect for most of the years, beginning with the collapse of the Chosun Dynasty and leading up to the Sixth…