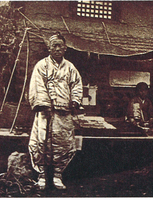 From Chosun Dynasty to Segehwa

A Cultural Mapping Of Contemporary Korea

In a 1978 survey of American attitudes toward Korea conducted by a survey and research organisation in Washington DC, Korea was associated primarily with negative information in the public imagination. Only seventy-five per cent of the respondents could locate Korea somewhere on the periphery of China, and more than half pictured Korea as crowded and underdeveloped. And surprisingly the…