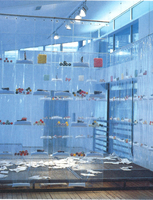 The Vanuatu Cultural Centre is unusual in the museum world. It concentrates not so much on objects as on oral traditions, not so much on preservation as on revival, not so much on displays as on what happens on dancing grounds in remote islands. Until the new museum building opened on 17 November 1995, it was based in rather dilapidated quarters on the main street of the national capital, Port Vila. Inside the display rooms, where…