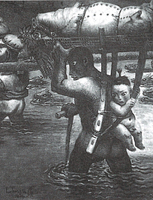 In 1936 Walter Benjamin noted in his short essay, "The Storyteller", that soldiers returning from the First World War were dumbstruck, unable to speak of their experiences of the horrors they had witnessed.1 The soldiers were stunned into a decade of mute expression. Benjamin traced this crisis to the virtual extinction of storytelling as a source of information and as a form of communication. Storytelling became a central component of Benjamin's aesthetic theory…