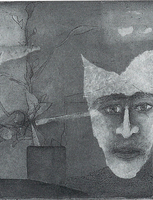 Luo Zhongli was thirty-two years old when he exhibited his work titled Father at the China Art Gallery in 1980. This work had an incredible impact throughout China on everyone from intellectuals to the general public. The painting is over two-metres high and portrays an ordinary peasant. Usually painting of this scale was used only to depict Chairman Mao, who was characterised as a god at that time. In the tradition of super-realism as developed by American artist Chuck Close, Luo adapted its empty form, but poured into it some heavy historical mud. The…