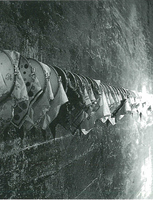 The exhibition 'Linkage/Leakage', held in Cairns from 23 August to 3 October 1996, marked a significant milestone in the increasing prominence of artist-exchange projects on the Australian visual and performing arts agenda. As the first such major project held outside a State capital city to include the participation of artists from the Pacific and Southeast Asia, it indicated the potential for local artists cooperatives, like Kick Arts, to assume a…