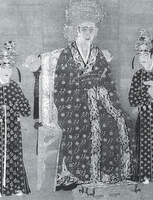 Art history as practised in the western world has characteristically marginalised non-western visual culture. The very popular American college textbook Gardner's Art Through the Ages, for instance, seems so unaware of the basic facts of Chinese history that its ninth edition (published in 1991) can have a sub-heading in its only chapter on Chinese art which reads 'Ming, Ch'ing, and Later Dynasties'. Tere were no later dynasties, of course, and a mind-set…