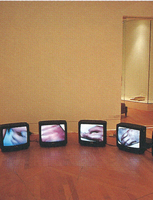 ‘Uncertain Pleasure: Chinese Artists in the 1990s' was U exhibited in April 1997 at Art Beatus, in Vancouver. Paris-based guest curator Hou Hanru selected eight artists originally from Mainland China whose work touches upon the diversity of media and strategies of contemporary Chinese artists working in China and abroad.

Vancouver is a young city with strong historical and cultural relationships with China in particular and Asia in general. In the early twentieth century it was the birthplace of racist…