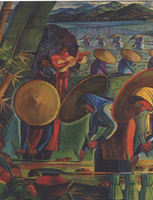 The development of modern art in Southeast Asia is fundamental to an understanding of contemporary developments but is surprisingly under-documented. 'The Birth of Modern Art in Southeast Asia: Artists and Movements', held at four Japanese venues in 1997,1 is thus an extremely important exhibition. One hundred and forty-eight artworks were exhibited. Most were paintings, but some works on paper and sculpture were included. The exhibition was organised by the Fukuoka Art Museum…