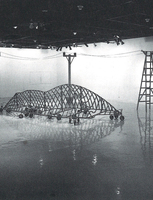 'Viêt Nam Voices', an exhibition at the Casula Powerhouse in Sydney, aimed to address Australia's controversial involvement in the Vietnam War. Rather than presenting a definitive historical account of polarised views from the 1960s, 'Viêt Nam Voices' conveyed the impact of the Vietnam War on individuals, Australian and Vietnamese alike. John von Sturmer's remark in the catalogue that, 'War is only present through its absence', appears salient to the curatorial rationale of 'Viêt…