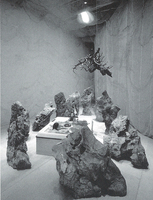 The possibility of a specific definition of Asian modernity beyond the restricting dichotomies of East/West, tradition/modernisation lies at the core of this strong exhibition curated by the late critic and art historian Alice Yang for the Drawing Center, New York and scheduled to tour two other American venues. 'Tracing Taiwan' presented not only a range of choices aimed at defining the essence of a distinctive Taiwanese art, but also represented…