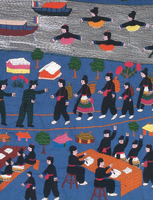 The Weavings of War

Textiles from Vietnam, Laos and Thailand

Twenty-five years after the withdrawal of American troops from Vietnam, textile artists from Southeast Asia - mostly women - are still depicting their war experiences in cloth. Through the lens of their art we see images that once appeared nightly on western television screens - minefields, massacres and labour camps; helicopters, tanks, rifles and grenades - appearing in the…