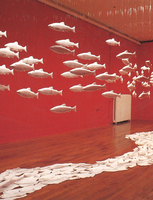 South of the Yangtze in Vancouver

‘Jiangnan: Modern and Contemporary Art from South of the Yangtze River'1 was the largest collaborative art and educational event ever held in Vancouver, Canada. Between mid-March and the end of May 1998, four universities and thirteen public, commercial and artist-run galleries participated in presenting memorable exhibitions of works by more than twenty-four internationally recognised artists from Shanghai, Hangzhou and elsewhere in China's Jiangnan region. The three-month 'Jiangnan'…