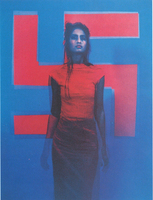 A sense of self:

If ever there was an appropriate riposte to the nail bomb that exploded in the centre of East London's Anglo-South Asian community on 26 April 1999, it could be found several minutes walk away from the site of the blast in '000zerozerozero', an exhibition in July 1999 at the Whitechapel Art Gallery in London. Indeed, against the backdrop of this act of racially motivated aggression directed at one…