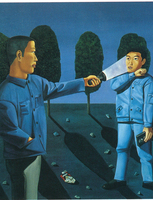 Presenting a survey exhibition of over seventy-five works by twenty-nine artists from Mainland China may seem like a grandiose task for a three-year-old commercial American gallery, but Limn Gallery, located in San Francisco's cutting-edge South of Market district, pulled off such a challenge with admirable aplomb. The gallery's ambitious two-part show of contemporary Chinese art, entitled '1999 Art China', had a focused goal: it was conceived as an 'update'…