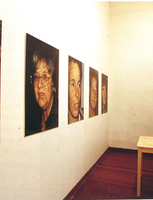 Finding a place for art:

‘New Generation Museums: Enriching and Engaging' is the slogan that currently adorns Singapore's double-decker red buses advertising the city's three major museums administered by the National Heritage Board. Cultural promotion in Singapore is imbued with a political urgency to attract the resident population before its infatuation with materialistic lifestyle pursuits further erodes the residue of cultural pride.

The government's recent focus on the arts is also designed to give some texture and edge to the pristine, seamless facade that is Singapore's public image…