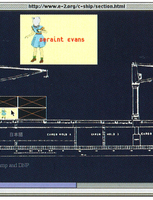 In the headlong digitalised world, the term 'new media' is almost an anachronism: by the time this issue of ART AsiaPacific comes off the (old media) press, it will be in need of an instant update. Mimicking the hyperbolic world of super-, hyper-, mega-markets, new media organisations are now inventing new definitions that split the previous meta-terms and attempt to encompass the frenzy of change. Critical debate in the visual arts has only just begun to keep up…