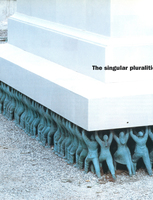 Yoko Ono’s song titles are the source for an ongoing series of word paintings by Maria Cruz. Starting out as a catalogue of tracks from the albums Approximately Infinite Universe (1972) and Feeling the Space (1973), Cruz’s canvases spell out, as bold message or incidental communication, Ono’s characteristic blend of personal and political statement. With the simplicity of their mix of 1970s feminism, peace activism and lyric demonstrative storytelling, the statements present us with a life - a very famous life - as a backdrop to our own.