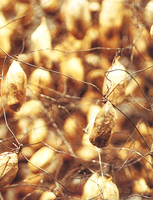 In 1989 Yuriko Yamaguchi received major attention from the art world with her delicately carved wood relief objects: small, meditative and referential shapes that relate to the world of poetry and dreams. For almost a decade Yamaguchi has delved into and challenged the theme of 'metamorphosis', creating a series of four sets of vertical wall installations. In 1999 she began another series, 'Web', consisting of a weave of constellations made up…